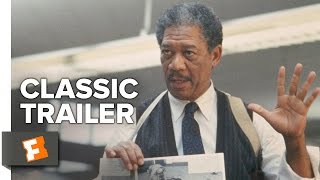 A film about two homicide detectives' (Morgan Freeman and (Brad Pitt desperate hunt for a serial killer who justifies his crimes as absolution for the world's ignorance of the Seven Deadly Sins. The movie takes us from the tortured remains of one victim to the next as the sociopathic "John Doe" (Kevin Spacey) sermonizes to Detectives Somerset and Mills -- one sin at a time. The sin of Gluttony comes first and the murderer's terrible capacity is graphically demonstrated in the dark and subdued tones characteristic of film noir. The seasoned and cultured but jaded Somerset researches the Seven Deadly Sins in an effort to understand the killer's modus operandi while the bright but green and impulsive Detective Mills (Pitt) scoffs at his efforts to get inside the mind of a killer...

A film about two homicide detectives' (Morgan Freeman and (Brad Pitt desperate hunt for a serial killer who justifies his crimes as absolution for the world's ignorance of the Seven Deadly Sins. The movie takes us from the tortured remains of one victim to the next as the sociopathic "John Doe" (Kevin Spacey) sermonizes to Detectives Somerset and Mills -- one sin at a time. The sin of Gluttony comes first and the murderer's terrible capacity is graphically demonstrated in the dark and subdued tones characteristic of film noir. The seasoned and cultured but jaded Somerset researches the Seven Deadly Sins in an effort to understand the killer's modus operandi while the bright but green and impulsive Detective Mills (Pitt) scoffs at his efforts to get inside the mind of a killer...

"Se7en is well crafted and ingeniously clever, making it one of the greatest films of the 90's"

The movie, "Se7en", starring Brad Pitt, Morgan Freeman, and Gwyneth Paltrow, is by far one of the most inventive, well-written, and cerebral films in recent history. The film, blending a well put together combination of dark visual style, intense plot development, and polished acting, remains tight and focused throughout, from beginning to end, never straying outwards into unimportant issues, or resorting to typical Hollywood clichÃ©s. Se7en is uniquely on its own for suspense dramas as it both fuels the need of the audience to be drawn in and entertained by the events unfolding, and remain uncompromising and shocking, thus satisfying the initial vision of the director, David Fincher.The story surrounds the hunt for a serial killer, who, inspired by Dante Alighieri's seven deadly sins from "The Divine Comedy", sets out to, "preach" about man's impurity, and does so by targeting victims, then torturing them by pitting their own underlining sins against them. Se7en seemingly starts out as a typical cat and mouse detective story, however, it quickly develops into of a sort of modern-myth, with good and evil taking centre stage. The story is original on all counts, and thrilling on all levels. The most important aspect of Se7en, however, is that it keeps the audience numerous steps behind its story, as oppose to other thrillers, which become predictable and bland by the end. By keeping the audience in the dark, the film remains fresh and original as it progresses. Se7en even dramatically turns the tide at one point, just as the audience is finally getting comfortable and asserted into the gloomy atmosphere, thus creating as much as fear and uncertainty in the audience as it is with the characters involved. By the film's conclusion, the audience is as much apart of the film as the characters themselves, and arrive at Se7en's surprise ending without a single clue of it, prior to it occurring. Se7en's poetic ending(which will not be given away) says a lot for the people behind the movie, showing they are not afraid of going against the grain. A rarity with films so nowadays.Directed brilliantly by David Fincher, and skillfully written by Andrew Kevin Walker, Se7en is well crafted and ingeniously clever, making it one of the greatest films of the 90's. While Se7en may not have garnered critical acclaim as such films as Silence of the Lambs, Se7en is, undoubtedly, as influential as any film to date.Score 10/10

Seldom does a film elucidate the culpability of our culture,of our society, in the mayhem and madness we often find in everyday life. According to Se7en, our culture is drifting through darkness. The mouthpiece for this thematic undercurrent is Somerset, a literate man who also happens to be a detective, a man who can read a clue ("This isn't going to be a happy ending") or Dante's Inferno with equal aplomb. He even provides the film's final thematic statement with a quote from Hemingway. His quirkiness, perhaps the outgrowth of a brilliant mind, is no worse than that of any prophet or seer of old, those harbingers of Biblical insight whom others always find kooky and offbeat. He is not well loved for his cynical, pessimistic outlook (such that his consuming motivation is to retire and get out of town). However, by the end it becomes clear that it is Somerset who sees our dark world with the prophet's particular clarity. (It is left to his partner Mills to find this out the hard way).Working on us to reinforce this world as Somerset sees it is the film's astounding mise-en-scene, a disturbing film-noir setting developed by director David Fincher and cinematographer Darius Khondji. Flashlights barely illuminate the slimy walls of the roach-infested tenement of one victim and the dark bedroom of another. Rain pours down in buckets. Bird's-eye-view shots of downtown (the city is never named- a generic, everyman's kind of place) show dingy, sooty rooftops and grimy streets. Only the film's closing scene is in bright sunlight, which by then only serves as ironic counterpoint to what we see happening.This is Somerset's vision; both inhabited and described by him. He finds a surprising fellow traveler in, not his partner, but the elusive killer John Doe. Doe shares the vision and provides an unsettling echo to the rumblings and teachings of Somerset. If one looks at life through the Somerset lens, one must admit that John Doe has a valid point. He and Somerset have arrived at the same conclusion, the difference between them being how they have responded. (Somerset longs to escape to some otherworldly realm in the country. Doe has taken action.)Though gripping and fast moving, this is not an action film. It holds our interest through the workings of horror and mystery: a stark, film-noir detective piece. Except for one tense pursuit through halls and alleys in pouring rain, as well as the bit of ending action, there is surprisingly little violence. We see each murder, save two, after the fact, as a crime scene. This only makes the final act that much more suspenseful.This is a very tight film. Elements within: dialogue, actions, lighting, setting, all of these tend to reinforce one another to paint a solid picture. It is a perverse logic that makes the final and seventh sin complete perfectly the circle of events begun with the first.

Probably the greatest murder story ever

Seven's quality puts it so far beyond most of the "cops on trail of deranged killer" genre that it comes out as a true jewel of cinema. Everything about seven is perfect. It is art captured on film. This movie is a bright spot for all of the stars who worked on it. Brad Pitt never gets the credit he deserves for his acting because he's a pretty boy and the press is a lot more interested about how he and Jennifer are doing. That's a shame because he is a talented actor that isn't afraid to take chances with both the roles that he picks and the characters that he plays. That is quite rare in the A-list world. Morgan Freeman is a great actor. You can always count on him to do what he does best which is play a wise veteran that has seen it all. Kevin Spacey is another great actor that has great range and really puts life and personality into his characters.The real talent of this movie, excluding the actors that brought it to life, is the director David Fincher and the writer Andrew Kevin Walker. Fincher's talents for making a visually stunning film are now well known and he often brings a dark patina to his work. Andrew Kevin Walker must have some incredible demons living inside him. Either that or one hell of an imagination for bringing the intricate story of Seven and the plan of John Doe to life. John Doe's plan really is twisted and I won't be spoiling it here. Suffice to say I have never seen so evil and complicated a plan in a movie before or since. The cinematography of the film is dark but beautiful and throughout the film it is either night or raining or both except for two very brief moments. It is such an emotional movie that you can't keep from being caught up in what is happening. Do you understand and sympathize with what John Doe is doing or do you think him a mad killer that must be stopped.Bottom Line: If you haven't had the opportunity to see Seven yet then you must at least rent it. It is so damn good that I know you will like it. The only reason you wouldn't is because you're just too damn fragile to take something this hardcore.

Gothic, shocking, suspenseful, disturbing and clever, `Seven' marked a new beginning for director David Fincher's career. This dark tale of murder and crime revolves around two detectives in present New York city played by two brilliant actors `Brad Pitt' and `Morgan Freeman' who are paired together to solve a puzzle of murder that is at the hands of a man who kills regarding to the seven deadly sins. Both actors displayed striking performances that are so sharp and realistic sometimes you have to remind yourself that's its all acting. David Fincher's masterpiece really gives us an opportunity of a lifetime, maybe it's one that we don't all wish to share, but by seeing this movie you will experience a glimpse of the horrors that this world is filled with, and a small piece of mind of a man who you only prey you never have to meet.Brad Pitt successfully proves to us that he's not just a pretty face on screen, and that he sinks into his character so well, that you can walk off after the film finishes classifying him as a pretty darn good actor.You wouldn't expect anything else from Morgan Freeman because it's perfectly obvious that this guy was born to play the roles of the smart detective.David Fincher's timeless directing and memorable filming captures all the goods that this film has to offer and will undoubtedly leave you shocked and begging for more films like this. Seven is a step into the harsh realities of life, a realistic portrayal of two detectives investigation into the un-describable horrific world murder, and the darkest realms of the human soul.We can only prey for more classic memorable work from Mr. Fincher and for those future directors who are intent on making a gothic, psychological thriller, make sure you sit down and watch Seven with a pen and paper ready to take notes.