Prince of Persia: The Sands of Time

Prince of Persia: The Sands of Time 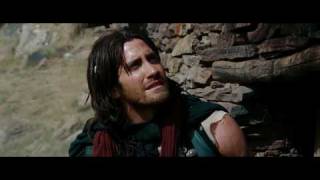 Set in the mystical lands of Persia, a rogue prince and a mysterious princess race against dark forces to safeguard an ancient dagger capable of releasing the Sands of Time -- a gift from the gods that can reverse time and allow its possessor to rule the world.

Set in the mystical lands of Persia, a rogue prince and a mysterious princess race against dark forces to safeguard an ancient dagger capable of releasing the Sands of Time -- a gift from the gods that can reverse time and allow its possessor to rule the world.

Not Your Average Video Game Flick

Tonight I was fortunate enough to see an advanced screening of this film. Like many, I became a fan of this franchise with the Sands of Time trilogy, and I was very excited when I learned that there were plans to make a feature film based on it. The storyline of the game is very cinematic (at least in the aforementioned trilogy, not necessarily in the previous games in the series) so I felt that at film adaptation would be an impressive epic.Having finally seen this movie, I can say that I was not at all disappointed!One of the main strengths going into this movie was it's involvement of the series creator Jordan Mechner. He crafted a very engaging screen story that pushed beyond the controller, creating an entirely new addition to the mythos. I know that at times including the creator can sometimes stifle the process, as many will fight changes to the source material that may need to be altered to work better with a director's vision; but I feel that Mechner's involvement showed his desire to see his brain-child develop into a success on the big screen.In addition to involving Mechner, the other big strength was the way that the filmmakers chose to handle the story. Let's face it, movies based on video games have a very poor track record. Super Mario Brothers, Street Fighter, Tomb Raider... all of them made for films that were mediocre at best, and downright abysmal at worst. Prince of Persia had a mighty big hurdle to clear with this, and they found the perfect team to tackle it. Jerry Bruckheimer and Disney already accomplished a similar feat when they brought Pirates of the Caribbean to the big screen (a movie based on a theme park ride, in a genre that had not seen success in 50 years!) Their strategy was the same, they wrote their own story that borrowed elements from the game, but did not strictly follow it. The film stands alone, and does not require it's audience to be intimately familiar with the source material. The nods to the game throughout were great, but I was relieved that I was able to enjoy this film for what it was, rather than constantly looking for where it deviated from the games.This movie clearly was made for someone like me, and in my party of four, three of us, who were all guys, loved it. The fourth, who was the only woman in the group, was less than impressed, and complained that it was too much action. If you're expecting Citizen Kane, you stand to be disappointed, but if you expect this to be another video game adaptation, you are in for a real treat!

The sands have spread fairly thin and it shows... but surprisingly in a good way

The common view amongst "professional" reviews is that the movie is average. scoring below 50% from Rotten Tomatoes, and MetaCritic, and notably a 2 out of 4 stars from Roger Ebert. The average user ranking on MC puts it at 9 out of 10.Most reviews range anywhere from 8 out of 10, to as low as 2 or 3 out of 10.If there's one thing critics can agree on, its that the movie is clichÃ©d, borrowing elements from plenty of epics based in the Middle East and fantasy alike, and that it's loads of fun.The one thing no one can agree on is whether that's good or bad.It should be pointed out that this film is produced by the same company/studio that brought us 'Pirates of the Caribbean', and it certainly shows.With that said, I'll lead into my thoughts on the film. The first "Pirates" scored on average a 7.8 - 6.4 of 10, while the sequels averaged anywhere from 4.5 to 5.3. I'd say this movie is better than the sequels while not as good as the first. So, I'd give it roughly a 7 out of 10.The story is fun, for what it is. Which is a rough retelling of the video game "Prince of Persia: The Sands of Time", while incorporating elements of the following two sequels, as well as incorporating stylistic elements from the following game and the first three of the original trilogy. Thats right! Based loosely on one game, borrowing elements from SIX more. The movie is stretched too thin, and it shows.The movie feels like your prototypical "sword and sandal" action flick, borrowing heavily from films like "The Thief of Baghdad", and stories found in "1001 Nights". So think 'Arabian Nights', Ali Baba and the 40 Thieves, Aladdin, all mixed with some Steve Reeves 'Hercules' and Robert E. Howard 'Conan' flash.Is it as cheesy as that sounds? YES! Is it as awesome as that sounds? YES!But it's still well edited, well acted, well scored (Harry Gregson-Williams never fails), and overall well done enough to merit an enjoyable experience.The ONLY complaints I can think of are few, but here they are: A bit too much CGI, not on the stunts (not much CGI there surprisingly) but on things like demonic-esque snakes (you'll see). Too much random slow-motion. The sexual-tension seemed too forced (too many of those really slow "they're about to kiss but don't" moments). And whereas yes, the ending is supposed to have a "Deus-Ex-Machina" feel to it, in the game it is much more thorough and more explained, in the movie you're just expected to roll with it.Other than that. A fun night at the movies! Grab your over-priced candy, soda, and popcorn (or do like me and sneak snacks in) and have fun with friends, family and loved ones, recapturing the fun escapism of your childhood with an epic but clichÃ© action movie.Hope you enjoyed my review... And I hope you enjoy the movie too!

Did you see Iron Man and Robin Hood? Yes? Well, this film is better, simply because the story is original. I know, I know, it is based on the computer game...which I used to play ages ago...but the story portrayed in the script is classic and refreshing at the same time; the performances are natural and the stunt scenes are unbelievable. Now, what did Iron Man 2 miss and this movie excels at? Plot, and a fast action pace without being over caffeinated big bang explosions (ever saw G.I. Joe?)Having said that, you must be warned, the dialogues are simple but not stupid and it does contain a fair amount of moral references.Sure everyone is crying out loud about the British accents... "ohh but Persians didn't speak English" yeah but this isn't The Passion of The Christ, or Apocalypto and Mel Gibson was nowhere near the production, Jake Gyllenhaal is an American, but the rest of the cast is British, makes sense they should all have a similar accent doesn't it?? So quit yer whining Overall a good wholesome fun summer movie. worth repeating!

It was entertaining and fun

First of all when I read some of the reviews about this movie all my excitement was drained but I went to see it anyway. What do you now, the movie was great. It was fun, had a lot of action in it, the CGI was nice (excecpt few scenes in the beginning). I thought acting was nice Gyllenhaal (prince) and Arterton (Princess) did a good job in my opinion. As a fun of the game; the script wasn't entirely accurate just like most of the movies based on games but it didn't stray too far either. OK it was not the perfect movie but it was something that I would go and watch its sequel.Overall I enjoyed myself and I believe if you go open minded you will enjoy yourself too.